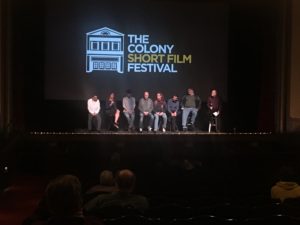 public screening of my latest short film. That was fun. Whenever I play with a comedy, it’s such a hit or miss experience. First everyone’s sense of humor is unique. Secondly, a live audience is an amorphous and unpredictable beast because some people might like crude humor, but if everyone else in the room ain’t grooving on the edgy humor, they might stop laughing.

And I went super edgy with this one…

The gamble appears to have paid off. It takes a (literal) minute, but then I get the audience and I don’t let go until the very end. Hearing audible laughter, even that build up of “Oh no!” at all the right moments made me feel great. I’m happy with this piece. The film festival submission count is right now around 60+ so I have stopped submitting.

And the Colony Theatre Film Festival is awesome. They treat filmmakers like gold and we all hang out in the VIP room and chat. I’m more talkative than I used to be at these things. 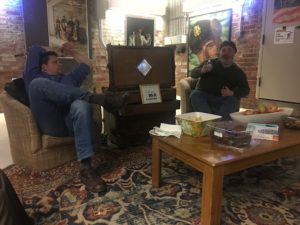 I’m casting the next short film right now, getting the people I really want. Also crewing up and meeting with a D.P. tomorrow to see if we’re going to do this thing. I had the idea last summer and just never made it. Now that I have so many more lights, better cameras, and the confidence boost of the finished short film, I feel like it’s time to get back to it.

This next short film is just a scrimmage for the big game. It’s just a very short dramatic story about a relationship. I love the story and the visuals are all there in my head (and storyboarded by Naomi). 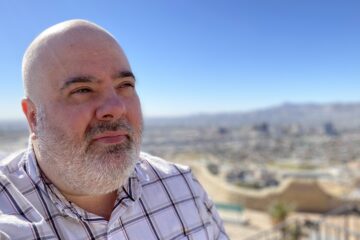