March of the Swivelheaded Ant Man

Let’s start with the mystery of my opinion of THE DARK KNIGHT, since I last left off before seeing it. I dugit. It rocked. Yes, they clearly used HEAT (1995) as a basis of the overall plot structure, which was a good thing. If the idea was to make Batman seem “realistic” they took that ever further in this one than BATMAN BEGINS (2005). I’m seeing it again soon in IMAX and I have since read the script. There are some subtle details in the words, but mostly I’m enthralled with the very well written dialogue. Very natural and something filmmakers should bear in mind. Well, we just did another INDIE GATHERING in Cleveland this past weekend. They are always fun. I set up a booth, sell some DVD’s, give away CD’s and hand out for upcoming events. Of course, I sell more DVD’s and books when My Sexy Fiancé Veronica ™ sits at the booth by herself. How odd that the pretty girl sitting alone gets more and more convention boys to buy more product!

I did 5 panels on various aspects of film. I haven’t done much of this stuff lately, as my public appearances have voluntarily dwindled. The social and public coma I have been in for the past year has started to fade. As I prepare for the next few months, I’m already turning up the volume on what I’m doing.

On the way home, the magical MARIE’S PIZZA was had with a brief stop in Wadsworth Ohio where my arteries choked on the most blissful combination of tomato sauce and cheese on bread. Every time I’m within 50 miles, I stop off in my old home town to partake of the pizza I grew up on.

Cleveland fascinates me. They have so much more in the way of older buildings, gothic architecture, and MOM & POP stores. There’s a lot more identity to Cleveland than Columbus. I feel like if Columbus were to be defined, it would be a strip mall with an Applebee’s next to it. There are these tiny pockets of originality here and there, and I wish they could succeed and explode to drive away the corporate, test-market-y stains of retail that permeate everything else.

I cannot blame the giant anonymous “they” of the corporations. They are only 50% to blame. The other half is the people and consumers themselves that prefer this generic, uninteresting blah.

GOODNIGHT, CLEVELAND! has almost finished its sound mix. We’re on time for the Sept 11th premiere, but it has not been an easy road. Miguel Baldoni Olivencia has decided not to Alan Smithee the movie, and take credit. This pleases me immensely. It’s his movie, not ours, no matter how different the “intent” was during the shoot and the “result” from the edit. Micah Jenkins works his head off with these edits and smoothing of audio from 1996-1997 in the new digital realm. I often have to say, “We can’t make it good, only better”. That’s the mantra for a film this old. 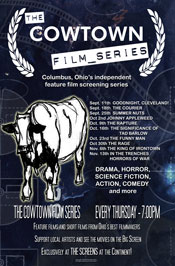 THE COWTOWN FILM SERIES just got our big wish. For the Halloween screening on October 30th, I wanted a HORROR film, and specifically I wanted to screen Bob Kurtzman‘s THE RAGE. THE RAGE was shot here in Ohio after Bob Kurtzman
moved back here from LA. For those not in the Know, Bob Kurtzman is the “K” in KNB Effects. He worked on movies like EVIL DEAD, NIGHTMARE ON ELM STREET, TEXAS CHAINSAW MASSACRE, AUSTIN POWERS, & SCREAM. Rob is also the originator of FROM DUSK TILL DAWN, writing the story that Quentin Tarantino adapted into a screenplay and Robert Rodriguez directed, and he made his mark as the director of WISHMASTER, and more recently THE RAGE. What most people don’t know is that Bob Kurtzman came from Crestline Ohio, interestingly, the same place my entire mother’s side of the family came from. Bob has come back to the Midwest and planted a firm foot in the community and away from either coast. He’s started the studio PRECINCT 13 and setup shop doing visual FX for movies like Rob Zombie’s DEVIL’S REJECTS and more.

I might be losing friends as I turn down some shorts that have been offered to me for the whole series. I asked for a public call for entries, but not all of the pieces are up to snuff. I’d rather play fewer shorts of surpassing quality than let something go because I’m friends with someone. It’s a business and I’m sorry. Here’s an idea of what I’m doing with graphics/animation thanks to VideoCopilot.net’s tutorials.

Work shows no sign of letting up. My head hurts. Very little sleep for me as the August heat destroys the equanimity of cool air distribution on the 2nd floor of Rossdonia. I have picked up a cheap futon for the basement so that I might get some proper sleep at night on various nights. The problem is removing the old family blue couch from the basement, along with it dolly, and dolly tracks, and even a ¾” deck for relocation to the Production Partners studio. This is more than a 2 person job. At least I can afford an El Cheapo futon with a decent pad.

I once reposted a story about the great Stanley Kubrick
and how a London reporter got to go to his estate 2 years after his death and discovered all his boxes of research and information. It’s now a documentary and I found it hilarious and fascinating.

We upgraded our 2nd edit system (Edit “B”) here at work to the Matrox RTx2 system for real time HD editing. I am pleased that it works well with the other motherboard, as Matrox products are sticklers for compatibility. We’ve also increased our storage by 3.5 Terabytes at work, and I added 2.25 Terabytes of storage at home for My Sexy Fiancé Veronica ™ and her documentary. We have some progress. A rough cut is done, some graphics work is complete and now we have some archive footage from MARCH OF TIMES from the HBO Archives to go over what selects we’ll use & buy for the project.

We re-watched NO COUNTRY FOR OLD MEN in Blu-Ray™ last night. What strikes me best about this movie is the maturity of the filmmaking. Most people don’t grasp the concept of subtlety. Very little is spoken out loud in this film, so is not to beat the audience over the head with obvious or pointless dialogue. In a 3 minute film by John Whitney locally, “A FAMILY MATTER”, reminds me of that kind of mature filmmaking where the story is told visually with the words being spoken often telling you something other than the blatant plot points.

Peace out homies, and I hope the crazy people find peace in reading my blogs.